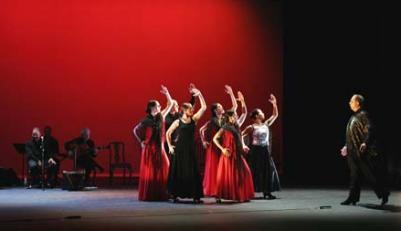 OSCAR NIETO and the Mozaico Flamenco Dance Theatre company ignited the stage in a sold-out performance October 2nd in Vancouver, BC. The program was inspired by the poem ‘Espiritu Sin Nombre’ (‘Spirit Without Name’) by Gustavo Adolfo Bécquer. Original choreography by Oscar Nieto evoked the ineffable power of life embodied in passionate form through both solo and company pieces.

The production brought together several elements from the world of Spanish and flamenco dance. One was the presentation of Spanish Neo-classical choreographies that were danced in the company of Lola Montes (Oscar’s mentor) and also were part of the repertoires of dance companies in the early part of the 20th century. Some of these dances are no longer performed in contemporary flamenco dance companies and it is Oscar’s vision that by presenting these choreographies they will not be lost.

The evening also included a gallery showing of powerful flamenco paintings by Marta Robertson Smyth in the foyer. Her work is often surrealistic and, like flamenco, personal and passionate. As well as being an established sculptor and painter, Marta has been a student and aficionado of flamenco for ten years.

Click here to listen to the ‘CBC Interview with Oscar Nieto’ which aired October 2nd, 2004. In this 13-minute interview, Oscar Nieto converses about the production Espiritu Sin Nombre (Spirit Without Name), and the process he follows from inspiration to choreography. He also discusses the resurgence of interest in traditional choreographies such as ones created by his mentor Lola Montes in the middle of the last century, that were recently re-staged for Espiritu Sin Nombre. Also included is commentary by visual artist Marta Robertson Smyth, whose paintings augmented this production. (Note large download file size, 6.5 mb)